Have you ever wanted to give hardcourt bike polo a try but were afraid to give it a go? Well here’s your chance.

This Saturday April 16th at 1pm and following Saturdays, as demand allows, Minneapolis Bike Polo will be holding “skills day” for beginners and intermediate players.

All you need to bring is yourself, a sturdy bike if you have one and a sense of adventure. We will have spare mallets to share and a few bikes to loan. Also if you bring $5 we will hook you up with a mallet head, ski pole and hardware to make your very own polo mallet.

Please spread the word to bike polo curious and as always keep an eye on @pickuppolo on twitter in case of inclement weather.

Why: Because bike polo is about as much fun as you can have on a bicycle.

Mr Do has once again outdone himself. Behold the bromance that is, Unchained Polo.

The first in, hopefully, a long series of Tips of the Week from Mr. Do. Last night the club gathered around a couple of laptops, cracked some beers and talked some trash in an old school IRC chat room.

We were not alone. Around the world, the pool of 150+ potential poloists gathered and watched as 6 GMs picked 8 teammates to compete in the Bench Minor 2 June 25-26, 2011 in Chicago.

Seattle lead the charge with 9 players being drafted. Milwaukee had 6, Chicago and Richmond each had 4 players drafted.*

Congrats to all who made the cut! This is going to be an amazing tournament.

*Not sure how I made that mistake… but Milwaukee had 6 players drafted, not 4 as I initially stated.

If you saw this tweet from @Surlybrewer you might be wondering what the purpose is of those things on the wheels. They are wheelcovers used for a sport called Hardcourt Bike Polo. We use these covers to block shots as well as keeping people’s mallets and feet out of the spinning spokes. They also protect the wheels from getting broken. Dustin, aka Mr Do, had these wheelcovers specially designed by Jinxy to include his favorite brew. Check the can of Furious in his hand.

— this quote was brought to you by quoteurl

If you need any more explanation check out Mr. Do’s videos on Vimeo. He’s one of the most prolific and also one of the best videographer/editor’s covering the emerging sport of bike polo.

Congrats to Calgary and Seattle!!!!

Congrats to both Calgary and Seattle and congrats to the North American Hardcourt organization for overseeing the bidding process.

Minneapolis hopes to send participants to both events.

Our club was proud to represent strongly at the First Midwest Open Bike Polo Tournament, held November 13-14, 2010 in Lexington, Kentucky. With 12 poloists and a small army of mechanics, trainers, medical staff and cosmetic technicians from the B-pool at the world-reknowned Aveda Institute, our four teams arrived in Lexington beginning Thursday late at night.

I drove with Ramon and Wade, pulling the first long stretch to Dubuque, Iowa before turning over the keys to Wade. We hit the road a bit later than Greta, Dustin and Landon, but managed to catch up to them in Indianapolis for a quick rest with our Indy friends.

After a few more hours on the road, we made it to Lexington and navigated to our lodgings. Upon arriving at the hotel, we began to break the rules almost immediately with 6 people in the room and a pile of bikes outside.

Friday morning we were able to sleep in, and as we were getting going, the remaining two teams arrived looking haggard from their overnight journey. 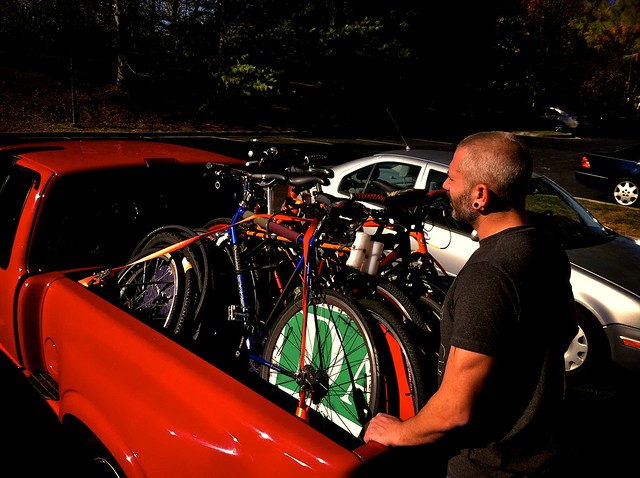 Some of us headed to the courts and the rest remained at the hotel. We talked to Nick and Grant about food and most of us headed down to a great breakfast spot with a silly name: Doodles. Cheese grits, get some!

After that, Landon, Greta, Wade and I cruised around Lexington checking out old stuff and nature. We visited the bike shop Pedal Power and got some pizza at one of two hippy-ish establishments we would visit over the weekend, Magic Mushroom. This is where we met Sharly.
[flickr-gallery mode=”tag” tags=”mobpt,tourist” tag_mode=”all”]
After dark, we went back to the courts and played some pickup, then headed over to the Sidecar to pre-register and get some beverages. In addition to being the coolest tiny bar I’ve been in, they had a decent beer selection and cheap beans and rice. We ran into lots of polo friends old and new. After we had dispensed with pleasantries and adjusted to our surroundings, we derbied the DIY bike shop that was about to open in the back. The shop is called Broken Spoke and they’re doing cool stuff, sorry we had to go and smash into stuff. 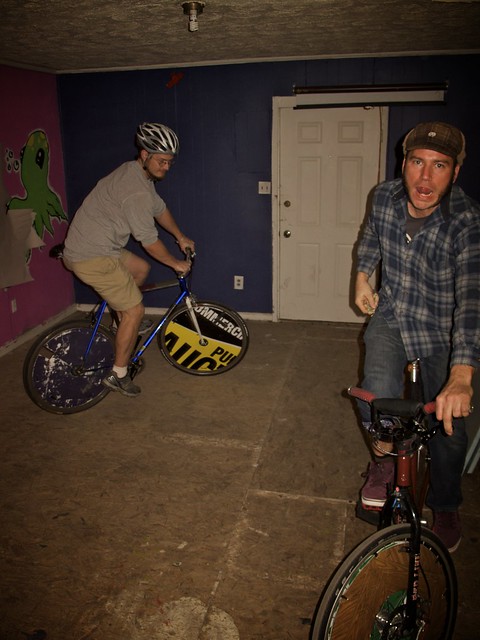 As we were leaving, it was announced that Al’s, the bar next door, was having a two-for-one whiskey shot special. When in Kentucky…. So much for getting to bed early.

Be sure to continue on to Part Two: The Tournament Begins.

Pete broke his hand a while back when his cable snapped and he crashed hard after hitting the goal.

Good news is he just got his pins out of his hand and he hopes to be back playing polo in the next month or so.

He’s been stopping by polo every now and then watching and shooting photos. Here are a few from this past Sunday. We are hosting Friendlies on Saturday the 16th of October in Minneapolis. 1pm until dark. Click here for directions to the park.

We will be playing polo, hanging out and grilling food all afternoon. The forecast calls for a gorgeous day.

Madison, MKE, Chicago, Duluth, Fargo, LaCrosse, Menominee, Mankato, Mason City and whoever else are all invited!

Matt H and maybe another MKE poloist are coming to town and we are throwing a party.